The Reverend Benjamin Dean moved to town in April 1828 when he became the pastor of the Baptist Church of Nottingham West (now Hudson). We know only a few details of his life before that time. Born in northwestern Massachusetts about 1793 he was ordained at Swanzy, NH in February 1826. Just prior to Hudson he was serving as an Evangelist for the Baptist Society in Westmoreland, NH. Most of his time with the Hudson church was a dark and difficult time. In less than 2 years his connection with the church was terminated as he was deposed by an ecclesiastical council and excluded from the church for immoral conduct. I have no further details about the claims brought against him. To Mr. Dean’s credit it is only fair to say that by 1834 he made a public concession of his wrongdoing and asked forgiveness of both the Baptist and the Presbyterians. You see, at that time both churches were worshipping in two meeting houses at different times; the North meeting house (near Wattannick Hall) and the South meeting house (near Blodgett Cemetery). A short while later he was restored to membership in the Baptist Church; he never returned to the ministry but did reside and work in the Hudson Center community. 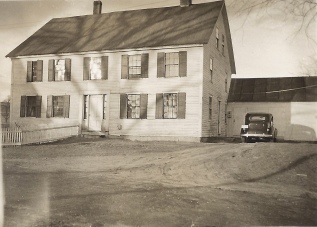 The Benjamin Dean house which was located on Hamblet Avenue is known as “The House Twice Moved”. This house was built by Abraham Page in 1747 on the Bush Hill Road and it later became a part of the Haselton Farm. By 1836 the owner, Benjamin Dean, moved the house down to Hudson Center on the east side of the Hudson Center common and a short distance from the North Meeting house where he had once preached. He married Betsey Hadley of Hudson in 1843. The US Census records, and the 1855 Diary of Eli Hamblett give us a sense of Hudson Center at the time. Eli and Benjamin were neighbors, owning the only houses on Hamblett Avenue. Dean often worked for Hamblet in exchange for farm produce. Agricultural lectures and school were sometimes held in Deans Hall; a large room with an arched ceiling on the second floor of Dean’s home.

The census records gave me a clue that he passed between 1850 and 1860. Whenever I searched for his date of death and where he was interred, I hit a brick wall. As it turns out he passed in December 14, 1856 and was interred in the early potter’s section of Westview Cemetery; burial places set aside for the indigent. The “rest of this story” has more to do with how this information made itself known to me than the facts themselves! The information came from two documents; one a part of the Historical Society collection and the second the old Westview Cemetery record book.

From a work ledger (1840 to 1865) kept by Eli Hamblet I learned that on December 14, 1856 he recorded a charge of $1.40 against the Estate of Benjamin Dean for taking his team to Nashua for a coffin and for sexton duties. Since Hamblet had a definite connection with Westview Cemetery I had reason to think Rev. Dean was buried there. This work document came into possession of the Society just a few years ago; it had been in a private collection and the donor wished that it be returned to this town!! Later, while doing some cemetery research on lot 76 (the Simpson family lot) I had reason to look up that lot in the old record book. Two thirds of the present day lot were once a part of the potter’s field which had remained unused except for one grave, that of Rev. Benjamin Dean. This fact had been lost from the records when the new book was started about 1900. I quickly looked at the layout of lot 76 in the current record book. The center of the lot shows the outline of the Simpson family monument superimposed over an outline of a coffin. I knew where Rev Dean was laid to rest! This information has been incorporated into the current cemetery records and steps will be taken for the site to be marked.

A dear friend of mine once said, “if you are looking for information about someone and that person (past or present) wished to be discovered they will assist you by making the information available to you. This may seem “spookey” but in this case with Rev. Dean this omen is true! The photo of the Dean House is from the collection of the Historical Society. That of the gravesite was taken by the author.  Researched and written by Ruth Parker