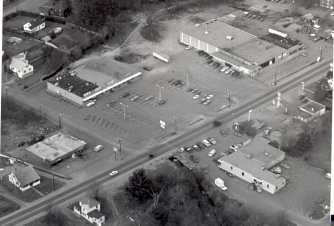 For this week’s photo we are flying low over the southern end of County Road looking west and slightly north onto the intersection of Birch Street with Lowell Road. Today this a busy intersection with traffic signals and stacking lanes. In the 1970’s traffic was flowing quite nicely with a couple of cross walks and a stop sign at the end of Birch Street. The building in the top right is the Hudson Super Duper Market, owned and operated by Bob and Doris Provencal. There was a grand opening and ribbon cutting ceremony in 1972. That same year Bob Provencal was named Grocer of the Year by The NH Grocers Association. Their family of Greg, Donald, and Charlene grew up in the grocery business. Charlene studied floral arrangement and would soon have her own shop. Donald was managing the frozen food department, and Greg was studying business in a local college. By 1972 the Super Duper was aligned with the Piggly Wiggly enterprise. Along with this super market the Shop and Wash and Richard Coiffures were located in this building. Today this building has been reconfigured into Citizens’ Bank, Rite-Aid Pharmacy, and office space for Hudson Chamber of Commerce.

Sharing the same parking space and just off Birch Street is the Hudson Shopping Center. At the time of the photo this was the site of Gio’s Pizza on the Birch Street side with Giovanni’s Blue Whale Restaurant facing Lowell Road. Next to the restaurant was Gosselin’s Pharmacy and then the NH State Liquor Store. Today this is known as T-Bones Plaza. T-Bones moved to Hudson C 1991 and has become a popular place for lunch and dinner with outside dining on the Birch Street side of the building. Other businesses in this complex include Subway, Supercuts, Pleasant Smiles Dental, a Tanning and a Nail Spa.

Birch Street takes a sharp turn behind the Hudson Shopping Center and we get a short glimpse of homes at 11 and 13 Birch. The latter, a brown square shaped home was once located on Lowell Road at the “other” corner with Birch Street where it was home to Etienne and Rose Levesque and family. After his passing the building was moved from Lowell onto Birch street by local contractor John Lester. By 1970 a 3- store front building at 87 Lowell Road was built; the first occupants being Cumberland Farms, Anton’s cleaners, and Russel and Son’s Carpets. Cumberland Farms and Hudson House of Pizza were the occupants in this photo. They remained until just a few years ago; Veria Pizza and Hudson Mini Mart are the current occupants.

Proceeding to the opposite side of Lowell we see the side and back of the home at 88 Lowell. Looking north on Lowell (to your right) is a green space and Second Brook which is visible through the foliage. If you follow the brook toward the river you see it was culverted under the street and parking lot; to emerge again behind the Hudson Shopping Center.

Just north of the brook is the business complex of Hall’s Market and Kay’s Donut and coffee shop. Over time this site has transitioned to Palmer;s Market, Suzie’s Diner, a Hair Salon and a Laundromat. Beyond in the photo we get a glimpse of the Phillips 66 Station; not a Sunoco Station. Prior to 1966 this was the home of Xavier and Exilla Gagnon and family. Photo from the collection of the Hudson Historical Society.  Researched and written by Ruth Parker.