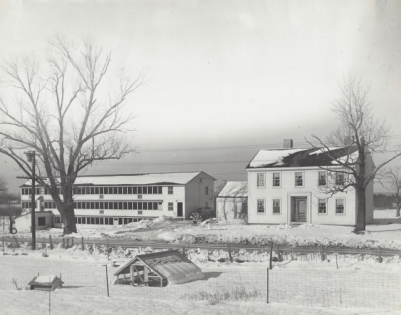 Nathaniel Hills, Jr, a young man of 23 years, settled on this farm about 1739 when his father transferred some 50 acres of land to him. These acres were part of the 900 acres of unsettled land that Nathaniel Hills,Sr had purchased from Jonathan Tyng. References vary as to the size of Nathaniel,Jr’s family. Kimball Webster in his History of Hudson in indicates that Susan (Baldwin) and Nathaniel Hills, Jr raised a family of 7 girls and 5 boys. When Nathaniel, Jr passed ownership was transferred to his third son, Samuel (born 1769). Likewise, with the passing of Samuel in 1843 ownership passed to Abijah (born 1806) and later to his son Franklin Augustus (born 1846). It is interesting to note that Abijah Hills in 1846, by an act of Legislature, had the family name changed to Hill. Franklin Augustus was a dairy farmer. He and his wife Luelle had one child; a daughter Helen who passed at age 14. In 1926 Franklin’s widow sold the farm to their neighbor, Grant Jasper.

This farm had been home to 4 generations Hill(s); passing from father to son beginning with Nathaniel, Jr. The original dwelling place was replaced C1830; likely while the farm was owned by Samuel or Abijah. The earliest photo we have of this C1830 Farmhouse was taken by the Jasper Family C 1945.

This farm became Annex #1 of Jasper Poultry Farms. Poultry man Jasper expanded the business into this new space. The dairy barn was remodeled into a three-deck poultry barn only to be burned in 1933. A new poultry barn was added as well as other improvements including a breeding/brooding house. From 1935 to 1939 operations at Annex #1 increased rapidly. The C 1830 farmhouse was used as living quarters for the employees of Jasper Farms.

Disaster struck the farmhouse during the early morning of January 17, 1947 when a fire started from the flooding and explosion of an oil burner near the kitchen. The flames from this explosion destroyed the entire house. The family in residence lost all their belongings; but, fortunately escaped without injury. The fire spread so quickly that the telephone could not be reached. The family fled on foot for about 1/4 mile to a neighbor in sub-zero January weather. Our second photo show the 1830 farmhouse as a result of the fire. There is no way of knowing what Hills family records were destroyed with this fire.

Little if any time was lost before rebuilding. The current house, as shown in our third photo, was immediately built using the old foundation.

By 1972, under the management of Robert Jasper, Jasper Poultry Farms ceased operations. However his son, Shawn, reopened a small poultry business at the Annex #1 location from 1979 to 1983. The property remains a part of the Jasper Corporation. The buildings at 62-64 Old Derry Road have been transitioned to retail space for light industrial uses and storage units; this mostly under the management and hard work of Shawn Jasper.

This farm was located on or near the end of Nathaniel Hill’s 900 acres (which proved to be closer to 1600 when finally surveyed). Until 1733 it was within the boundaries of Dunstable, MA; then it was part of Nottingham, MA. In 1734 the town of Litchfield, MA was chartered and this property was within it’s bounds. When the state line between MA and NH was settled this parcel became a part of Londonderry, NH. It finally was annexed to Nottingham West (later Hudson) , NH in 1788. This brief history gives you an idea behind the difficulty one has when researching historical records. All photos are part of the Historical Society Collection; complements of the Jasper Family.