Baker Brothers’ Store and Block as photographed in 1933 from the corner of Central and Ferry Streets at the bridge.  The building is decorated for the 1933 bicentennial celebration of the founding of Nottingham, MA in 1733.   The old watering  trough is in the lower left.   The 38 star American flag is displayed on the right. This became our official flag after admission of Colorado as a state in 1876.  Photo and flag are part of the Historical Society collection. (Published in HLN August 22, 2014.)
Advertisement

The Steak Barn Restaurant and Topspin Racquet and Tennis Club  located on Lowell Road c1976.  This photo was taken by the Historical Society while preparing for The Town in Transition.  The location of the Steak Barn Restaurant  The Monroe Muffler Shop (250 Lowell) and the Tennis Club was located in what is now the parking lot for the Walmart Store at 254 Lowell Road. (Published in HLN August 15, 2014.)

Hudson Center and Hambletts Garage our first ALA Station 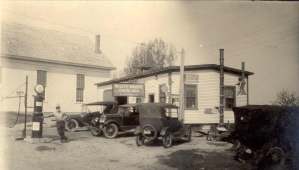 Everett Hamblett operated  a garage at Hudson Center for many years.  His first garage  was located to the right of the Old Town Hall (now Wattanick Hall and home of Hudson Grange).  The picture was taken about 1920.  It shows three old cards, Everett “Bill” Hamblett  leaning against a gas pump.  Price for gas – $0.24 per gallon.   His garage was later moved onto what is now Central Street near the location of Burger King. (Published in HLN August 8, 2014.)

Traveling from Nashua into Hudson on the original Sagamore Bridge in southern Hudsonc1976.  Lowell Road, once a series of farms growing a variety of produce in large fertile fields was being transformed to commercial and industrial use.  Opposite the bridge on Lowell Road is part of the Benton Morgan Farm. Photo from the Historical Society Collection.  (Published in the HLN August 1, 2014.) 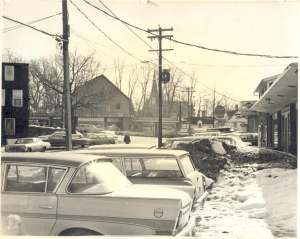 This is a view from Webster Street looking toward Ferry Street circa 1968.  Some of your readers will recall The 20th Century Store, White Cross  Super Store, Hudson Pharmacy, and the Laundromat.  These buildings were efficiently and quickly razed to make access roads for the Veterans Memorial Bridge which now connects Hudson and Nashua. Photo from our collection; photographer Tom Muller. (Published Hudson-Litchfield News (HLN) July 18, 2014.) 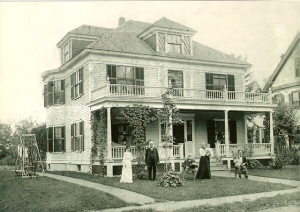 The home of Charles A. Daniels was built about 1901 and is shown in this 1904 photograph with the family.  Photographed are his wife Anna, her father David Sheldon and her mother Sarah who is holding Anna’s second child, Lorraine.  Seated on the steps is Rev. Franklin Chapin, the Congregational Minister.  Seated at the right is Charles A. Daniels holding his oldest child Raymond.  Once a part of the Gillis Estate this house lot was purchased by Charles A. Daniels in 1901.  Charles Daniels was the Hudson Postmaster from 1903 until 1921 and one of the proprietors of Daniels and Gilbert Store at the Bridge.  The home remained in the Daniels family until purchased by the family of Robert and Martha Smith in 1949.   This building is located at 35 Central Street and is owned by the Smith family  and is home to their family business Smith Plumbing and Heating.

Born in 1810 to Tamar and Thomas Hamblet, Eli lived most, if not all, of his adult life in Hudson Center.  Eliâs home and farm home was located on Hamblet Avenue facing the Hudson Center Common on the east side. This house was previously owned by John Foster who operated a grocery store there for about 19 years.  Eli married Rebecca Butler of Pelham in 1844.  Their daughters Rebecca Souvina and Arvilla continued to reside in the house after Eliâs death in 1896.  In addition to farming, Eli served his town in many ways; town clerk, selectman, overseer of the poor, and representative to the general court.  He was one of the organizers of the Hudson Center Library and he acted as the librarian when this small library was housed in his home.  He was a member and Deacon of the Baptist Church.  In 1876, when the Hudson Center Post Office was established at the Railroad Station behind the Town Hall, he was appointed postmaster.  He held this office until his death in 1896.  Eliâs entire family, including his parents, are buried in Westview Cemetery.  This house was the home of Robert Thompson, Sr and his family for many years.  After being vacant for an extended time it  was demolished a few years ago.