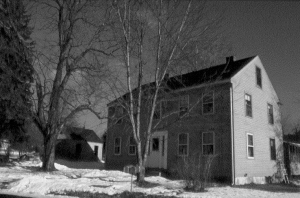 Born in 1810 to Tamar and Thomas Hamblet, Eli lived most, if not all, of his adult life in Hudson Center.  Eliâs home and farm home was located on Hamblet Avenue facing the Hudson Center Common on the east side. This house was previously owned by John Foster who operated a grocery store there for about 19 years.  Eli married Rebecca Butler of Pelham in 1844.  Their daughters Rebecca Souvina and Arvilla continued to reside in the house after Eliâs death in 1896.  In addition to farming, Eli served his town in many ways; town clerk, selectman, overseer of the poor, and representative to the general court.  He was one of the organizers of the Hudson Center Library and he acted as the librarian when this small library was housed in his home.  He was a member and Deacon of the Baptist Church.  In 1876, when the Hudson Center Post Office was established at the Railroad Station behind the Town Hall, he was appointed postmaster.  He held this office until his death in 1896.  Eliâs entire family, including his parents, are buried in Westview Cemetery.  This house was the home of Robert Thompson, Sr and his family for many years.  After being vacant for an extended time it  was demolished a few years ago.