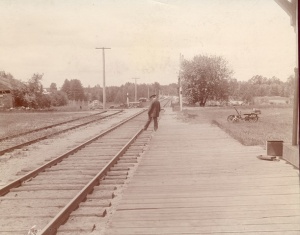 The steam railroad crossed the Merrimack River into Hudson just south of what is now Veterans Memorial Bridge as you cross from Nashua into Hudson.  It then made a path easterly and slightly north through Hudson.  The tracks crossed Lowell Road at Central Street and then on to Hudson Center and West Windham.  The one railroad station in town was at Hudson Center just off Greeley Street and behind the Town Hall (now Wattannick Hall).  In this 1896 photo we are standing on the tracks near the station looking west along the tracks and the Greeley Street crossing.  The corner of the station house can just be seen in the  right of the photo.  Greeley Street is a narrow dirt road and the area on the opposite side of Greeley appears as a wooded area or field.  Today there are few reminders of the railroad bed.  The area on the left is now the parking lot of the Baptist Church and the  area on the right is the Greeley Street playground.  Photo from the Society collection and courtesy of Len Lathrop. (Published in HLN October 24,  2014.)

John T. Benson(L), founder of Benson’s Wild Animal Farm, and Dr. Henry O. Smith(R), beloved medical doctor, were friends and neighbors as both lived in Hudson Center.  John T. came to Hudson in 1922 when he purchased property as a representative of the Hagenbeck Company of Germany.  He was known world-wide as an animal trainer and trader.  After accompanying President Theodore Roosevelt on a trip to South Dakota, Roosevelt presented him with 2 Great Dane pups which John T. raised and enjoyed for many years. John T. passed away in 1943.  Henry O. Smith was born 1864 in Hudson, studied medicine and returned to his home town.  A dedicated country doctor, he was fondly called Dr. H O or Dr. Harry.  He served the town not only as a doctor but also as historian and member of the School Board. Dr. Smith passed in 1945. Mr. Benson and Dr. Smith are shown here with one of the Great Danes, Freda. Photo from Society collection and courtesy of Len Lathrop. (Published in HLN October 17, 2014.)

Before 1886  the No 9 house  (Kidder District) house was located on what is now Robinson Road.   The approximate location was on the left side of Robinson (as you turn up the hill from Old Derry Road) towards the top of the hill.  The No 10 house (Hills Row District) was located on what is now Old Derry Road (earlier Derry Road) just north of the intersection with Greeley Street.  These two districts were merged into a single district and this  No 9 School House was built by the town of Hudson in 1886.   It operated as a one-room school house until 1932.  In the mid-1930’s Grant Jasper purchased the property from the town.  The No 9 Schoolhouse is the only one  which survives intact as a school house.  In the late 1970’s it was renovated by Mr. Jasper’s grandson, Shawn.  The school house is owned by Jasper Corporation. (Published in HLN October 10, 2014.)

Early school history of Hudson shows the town divided into 10 districts, each with its own school house.  Shown here is a sepia photo of the No 1 District Schoolhouse known as Musquash. with some of the students standing in front.   The school was located on the east side of the Back Road (now called Musquash Road) at or near the site of the First Meeting House. This house was used for school purposes until 1933.   Relics of the foundation of this school house can be seen in the wooded area behind the marker for the First Meeting House at Musquash. (Published in HLN October 3, 2014.)

After the D.O. Smith School on Windham Road was destroyed by fire, the school district voted to build a new school of similar size.  The sum of $900 plus the amount received from insurance was allocated for this purpose.  A conscious decision was made to not re-build on the Windham Road location.   The Hudson Center School, a two room house, was built on the east side of Pelham Road (now Kimball Hill Road)  just a short distance from Hudson Center.   This school remained in use until 1956 when it was closed.  The students were combined with the classes at Webster School.  Of the two teachers:  Florence Parker became a reading supervisor and Mrs. Marguerite Gilman  taught a second grade.  This building remains today and is privately owned.  Photo from Historical Society Collection. (Published in HLN September 26, 2014.)

Smith School – Last week we shared that Hudson erected two new school houses in 1896.  The second house was the D.O. Smith School  in Hudson Center on what is now Windham Road.  The building committee was authorized to spend up to $3,000 to build and equip the Smith School; which was named in honor of Dr.  David O. Smith.  In his younger years David O. was a successful teacher, he then studied medicine and became a very skillful physician.  After becoming a doctor he retained his interest in the schools of this town, doing  more for our schools than any other person during his long lifetime.  This school house was completely destroyed by fire and was replaced by the Hudson Center School on Kimball Hill Road in 1909.  The Smith School was located on the north side of the road at or near the present address of 42 to 44 Windham Road.  This picture is from an old sepia photograph from the Historical Society collection. (Published in HLN September 19, 2014.)

Kimball Webster School – In 1896 Hudson erected two new school buildings.  This large school house, situated on Sanders (now Library) Street was named in honor of Kimball Webster.  A serious fire occurred in January 1929 which  shot up through the roof and destroyed the cupola and  bell.  Repairs were made at a cost of $12,625.  School continued there for many years.  This building is now the Administrative Office of the Hudson School District. (Published in HLN September 12, 2014.)

The Bridge from Ferry Street c1968

Built in 1909, this concrete Taylor Falls Bridge  was replaced in 1970 by the Veterans Memorial Bridge.  A second span, the Taylor Falls Replacement Bridge  was  then added in 1974.  The 20th Century Store, Sports Car Village, and many other businesses were demolished  to make way for access roads and routes to and from these bridges.  Photo from the Historical Society. (Published in HLN September 5, 2014.)

Our First Police and Fire Chief 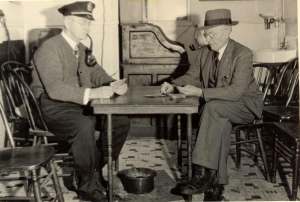 Aerial view of Alvirne  School circa 1949-1950.  Initially Alvirne  housed grades 7 through 12.  As population increased Hudson Memorial School was built on Central Street and Alvirne used for grades 9 through 12.  The first class to graduate  from Alvirne was in 1951.  The roadway from the right of the school and running parallel Derry Road leads to the farm pond, barn, and farmhouse. (Published in HLN August 29, 2014.)