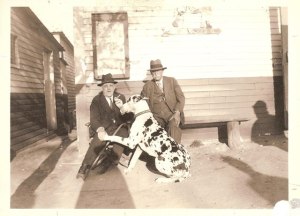 John T. Benson(L), founder of Benson’s Wild Animal Farm, and Dr. Henry O. Smith(R), beloved medical doctor, were friends and neighbors as both lived in Hudson Center.  John T. came to Hudson in 1922 when he purchased property as a representative of the Hagenbeck Company of Germany.  He was known world-wide as an animal trainer and trader.  After accompanying President Theodore Roosevelt on a trip to South Dakota, Roosevelt presented him with 2 Great Dane pups which John T. raised and enjoyed for many years. John T. passed away in 1943.  Henry O. Smith was born 1864 in Hudson, studied medicine and returned to his home town.  A dedicated country doctor, he was fondly called Dr. H O or Dr. Harry.  He served the town not only as a doctor but also as historian and member of the School Board. Dr. Smith passed in 1945. Mr. Benson and Dr. Smith are shown here with one of the Great Danes, Freda. Photo from Society collection and courtesy of Len Lathrop. (Published in HLN October 17, 2014.)