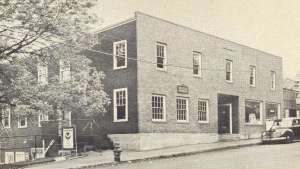 In the spring of 1947 the Hudson Post Office was the center of a controversy.  A plan to consolidate Hudson service into the Nashua office was being considered by the Postal Department.  Town officials and approximately 1,000 Hudson residents submitted a 30 foot long petition expressing the need for and confidence in the existing Hudson Post Office.  The decision was made to not only retain but to enlarge the office.  The Morey Building on Ferry Street, just above the intersection with Webster Street, was remodeled under the  supervision of owner Ernest Morey.  The result was this two storey, brick veneer building.  The new Post Office occupied 1/2 of the first floor; the remainder was rented out to Trombley’s Shoe Repair.  The second floor provided a small number of apartments. This was the location of our Post Office from 1948 until 1959 when town growth required the move to 15 Derry Street.  Those serving as Post Master during this time were Paul Richards and Roger Boucher.  This building was demolished during bridge and road construction in the late 1960’s.  Photo from the Historical Society Collection.