On September 6, 1967 the much needed middle school, Hudson Memorial School, was opened under the leadership of Principal James Tierney. With this facility a comprehensive educational program geared towards the middle school grades would provide transition from elementary grades to high achool. The total school enrollment that year was 2,177; 582 students attending grades 6-8 at Memorial, 721 in grades 1-5 attending H.O. Smith and Webster; 874 attending Alvirne. In addition to the core subjects the curriculum would include music (vocal and instrumental), remedial reading, science, library, foreign language, industrial arts, home economics, guidance, and physical education. This facility would be amongst the best in the state.

Hudson Memorial provided a permanent home for the Junior High pupils of Hudson. Prior to 1951 grades 7 and 8 attended Hudson Junior High at the corner of School and First Streets. Once Alvirne was completed In 1951 they attended that school along with the Senior High. at which time the Junior High was changed to an elementary school and renamed The H.O. Smith Elementary School. As school enrollment increased and the H.O. Smith Annex completed these graded were moved to the Annex. With further increases in enrollment and the building of an addition to Alvirne in 1965 the 7 and 8th grades were returned to Alvirne. This was considered a stop-gap measure until the construction of a new middle school.

Before the 1965 School District meeting the School Boad obtained educational specifications for an upper elementary building, formed a study group of lay citizens to work with them to determine the needs, possible site selection, and building requirements. The architectural firm of Irving W. Hersey was utilized for preliminary drawings and plans. This information was presented to the voters in preparation for the meeting. Voters approved $1,000,000 bonding for the construction of this school with the understanding that a public hearing is held once a site is selected and detailed plans in place but before project is put out for bid.

In 1966 approximately 22 acres was purchased between Central Street and Thorning Road from Earl C. and May Mizo and John Powlowski and a construction contract was signed with Davidson Construction of Hookset. The projected completion was for the spring 1967 and ready for use by September 1967. Completion date was met but the voters were presented with an overage because of some contractual issues and problems with the grading and paving.

At the dedication and open house October 29, 1967 the keys to Hudson Memorial School were presented by the architectural firm to Leonard A. Smith, Chairman of the Building Committee and Donald C. Shepard, Chairman of the School Board. Other members of the building committee were Royce Albee (deceased), Roger M. Boucher, Vincent F. Braccio, Paul W. Buxton, Maurice R. French, Joseph Gonda, Paul E. LeClair (also on School Board), and Philip G. Rodgers. Other members of the school board were Leo N. Bernard, John P. Lawrence, and William Roberts. 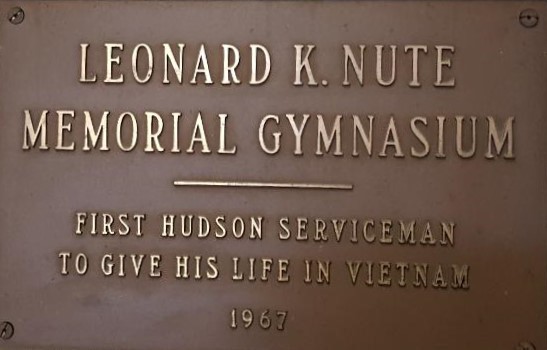 This day in October 1967 there was a double dedication. The gymnasium of the new middle school was dedicated to the memory of SP4 Leonard Nute, a Hudson serviceman killed in Vietman on May 25, 1967. “Lenny” was a 1965 graduate of Alvirne and the first casuality from Hudson in Vietman. A memorial plaque placed outside the main entrance to the gymn was donated by the Hudson Lions Club. Leonard King Nute’s name appears on Panel 20E Line 105 of the Vietnese Wall in Washington, DC.

School enrollment continued to increase after the school year 1967-68. At the School District meeting in March 1969 voters were asked to approve the construction of an addition. After an extended meeting this was approved at a cost of $744,000. Shortly after this meeting a contract was signed with Davidson Construction Company to provide complete services for the building addition. Ground breaking occurred in April with a completion date of February 1970, with a hope that several classrooms would be available by September 1969. A shortage of mason workers slowed the progress. As September 1969 approached it became obvious that these classrooms would not be available by September. A decision was made to partition the gym into 6 classrooms, the library into 2, and to use a large storage area as an additional room. With these 9 temporary classrooms the school year 1969-70 began. By the following school year construction was completed and the library, gym, and storage space returned to their intended purposes.

As we fast forward to 2019 the curriculum at Hudson Memorial has expanded to include music (a jazz band, chorus, and general music), drama, art, health, computers, technology, as well and family and consumer science. Within the sports department students can participate in interscholastic soccer, cross-country, basketball, wrestling, baseball, softball, and volleyball.