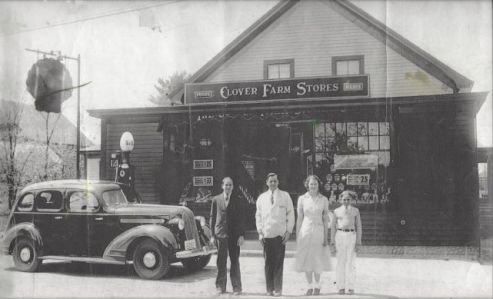 As we travel down Lowell Road our first stop will be at the Clover Farm Store.

By 1930 Alphonse and Eleanor Steckevicz with their family of 3 boys (Edwin, Alfred, and Chester) and 1 girl (Emma) had moved into their house on Riverside Avenue in Hudson. Alphonse established the Clover Farms Store, a neighborhood grocery, attached to the family home and facing Lowell Road. This C 1935 photo shows the Clover Farm Store and the Shell gasoline pumps taken from Lowell Road. Members of the Steckevicz family who were working at the store are in front. The 1935 Pontiac sedan on the left most likely belongs to one of the customers; if it belonged to the family it would not be parked so as to block customer access to the gas pump!

Alphonse owned and operated this store for about 25 years at which time ho sold to his son, Edwin. Edwin was a 1935 graduate of Nashua High School, a WWII veteran serving in the Army Air Corps. The Clover Farm Store remained under his management until he sold to Ray Lefebvre about 1961. Edwin also served his town as selectman for many years. His store on Lowell Road became a community gathering place. He knew his customers by name. Edwin was often known to open his store at all hours to help a customer in need. Edwin married Josephine Wolen with whom he had 60 plus years of marriage before passing in 2007.

This store continued under the ownership of Ray Lefebvre for many years. This building at the corner of Lowell and Riverside remains to this day; it is currently not used. Most recently it was Cheemas Supermarket. Photo from the Hudson Historical Society collection.