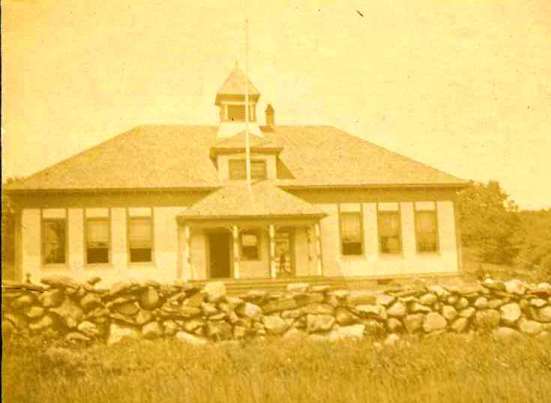 In 1896 Hudson residents voted to erect two new school houses. This vote began the movement to a centralized school system; departing from the the district school system. The Smith School shown here was erected for the convenience of families in/near Hudson Center.

The Smith School house was erected in Hudson Center on what is now Windham Road. The building committee was authorized to spend up to $3,000 to build and equip this school; which was named in honor of Dr. David O. Smith. In his younger years David O. was a successful teacher, he then studied medicine and became a very skillful physician. After becoming a doctor he retained his interest in the schools of this town, doing more for our schools than any other person during his long lifetime. This school house was completely destroyed by fire and was replaced by the Hudson Center School on Kimball Hill Road in 1909. The Smith School was located on the north side of the road at or near the present address of 42 to 44 Windham Road. This picture is from an old sepia photograph from the Historical Society collection.

By Ruth M Parker in Center, Hudson Center, Schools, Uncategorized on January 11, 2019.
← The Creamery at 26 Highland Street The Mill and Home At Eayers Pond →