The Creamery at 26 Highland Street 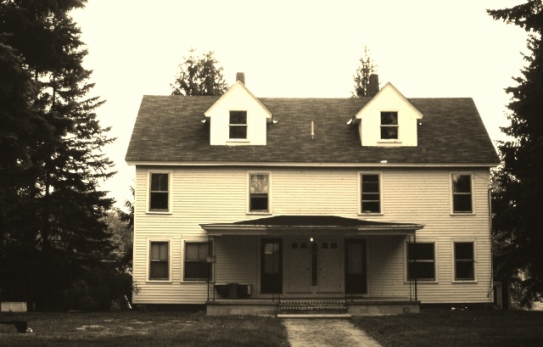 Located on Highland Street the Merrimack Valley Co-operative Creamery existed from about September 1891 until September 1898. The co-op was started by members of the Hills family and other residents of Hudson and Nashua; most of whom had roots to homesteads along what is now Derry and Old Derry Roads. Some of the folks in Hudson know of the creamery’s existence but do not know the details. Today we will look into the story behind the creamery and the connection with the families of Alfred K. Hills, Justin E. Hill, and Charles E. Spalding.

Alfred K. Hills and his first cousin Justin E. Hill were natives of Hudson. Alfred was born in 1840 to Alden and Nancy (Kimball) Hills; he grew up on his ancestral farm which is now the Alvirne High School farm. Justin was born in 1844 to Warren and Mary (Chase) Hill; he grew up on his family’s farm located on what is now Old Derry Road. After the 1860’s Justin was a business man living in Nashua. It is noted that Warren had his name changed from Hills to Hill by act of NH Legislature in July 1846. Alfred married Martha Simmons and attended Harvard Medical school, after which he established a medical practice in New York. By 1887 Martha had passed and he was married a second time to Ida Virginia Creutzborg. Dr. Hills had a strong bond with his home town; a feeling his wife Ida Virginia soon shared. By 1890 they purchased the family homestead and built a summer home, which they called Alvirne, on the premise. In addition to his medical practice in New York he retained an interest in the family farm in Hudson; hiring a farm manager to oversee it’s operation.

Charles W. Spalding was born in Hudson to Willard and Sally (Marsh) in 1835; he grew up on his family’s farm located on the west side of Derry Road near Grand Avenue near the location of the present Continental Academia of Hair Design.

Between 1878 and 1886 there were three significant inventions in the dairy industry. The first of these was the continuous centrifugal cream separator invented in 1878. This machine was used to separate the cream from the whole milk; leaving cream for commercial use to make butter. This process left skimmed milk as a by-product. In the early years skimmed milk was not popular for human consumption and it was used as a supplement for growing and fattening pigs. The second invention occurred in 1884 with the invention of the milk bottle; the third occurred 2 years later when the automatic bottle filler and caper was patented. Together these three inventions would aid the formation of a co-op creamery.

By September of 1891 the Merrimack Valley Co-operative Creamery Association of Hudson was established and they had purchased land on Barrett Hill Road (now Highland Street) from Nellie and James Cummings of Nashua for $300. At the annual meeting of the co-op in September 1892 the outlook was encouraging and the creamery was ready for farmers to bring in their cream for processing. This established the build date of the 26 Highland Street property as 1982.

In September 1893 minutes of the next annual meeting of the creamery were reported in the Nashua Daily Telegraph. From these we learn of the success and challenges of the corporation. After being in business for two years they were beginning to see signs of progress. Local farmers were coming on board as patrons and the creamery was able to make butter on a paying basis and to the satisfaction of the consumer and with good profits for the creamery and the local farmers. They were confident of an increase in the supply of cream as more farmers wold come on board as patrons. Production of the creamery had increased and the board of directors was confident of continued growth. On the other hand there was concern that the dairy farmers were not supporting the co-operative as they should. Perhaps they lacked confidence in the organization. At this annual meeting we find the following local individuals as corporate officers: Justin E. Hill, President; Dr. Alfred k. Hills, Vice-President, Walter B. Chase, Secretary; Charles B. Spalding, Treasurer; Daniel Boyd, Auditor. The Board of Directors was Justin E. Hill, Alfred K. Hills, Walter B. Chase, Charles W. Spalding, Hon. W.N. Beasom, H.G. Bixby and Daniel Boyd.

Within a few years, by September 1897, at a meeting requested by a number of stockholders, it was clear that the creamery was having difficulty sustaining itself. The call to the meeting included a request to consider the advisability of selling and disposing of the property of the association and winding up its affairs. On September 15, 1898, by vote of the stockholders, the board of directors disposed of the property and equipment of the co-op. The creamery parcel and building was sold to Alfred K. Hills of New York. The deed was signed by Justin E. Hill and Charles W. Spalding on behalf of the creamery.

Dr. Hills converted the creamery into a tenement house and continued to own it until July 1919 at which time it was sold to Herbert L. Boynton. Mr. Boynton was a native of Maine then living in Hudson and employed by the Nashua Street Railway in the power house on Lowell Road. Mr. Boynton retained ownership of the property until October 1923 when he sold it to Raymond L. and his brother Frederick R. House of Hudson. Frederick (Fred) House passed in 1940 and his widow Helen House transferred her interest in the property to Raymond.

In January 1955 a subdivision plan was created by Ned Spaulding, Civil Engineer, resulting in a ‘creamery parcel’ and three additional land parcels. By November 1961 Ray House sold the creamery parcel to Elwin R. Moss of Nashua. Since 1961 ownership of the ‘creamery parcel’ has been transferred a few times. It is now owned by a Realty Trust; a 12 room building of 4 units on .455 acres.

Among the artifacts in the collection of the Historical Society is a half-pint cream bottle embossed with the word ALVIRNE. I would like to think that this bottle was used in the creamery to contain cream from the cows at Alvirne Farm! The 1975 photo of the Creamery was taken by the author and is a part of the photo collection at the Historical Society. My thanks to Dick Crosby for his help with the deed research for 26 Highland Street.