So..you want to ride the trolley to Manchester, Lowell, or Salem?

By 1893 tracks for the street railway (trolley) were in place from Nashua down East Hollis Street to and over the iron Taylor Falls Bridge into Hudson ending near the east end of the bridge. For two years this was a horse drawn trolley which provided fairly good service between Hudson and Nashua.

By 1895 it was re-organized as an electric railway and the tracks extended from the bridge up Central Street and down Lowell Road with a popular stop at the ‘five cent limit’ where Lowell Road branches into Dracut and River Roads (aka Stewert’s Coner). The tracks went beyond this point down River Road to the state line. The infrastructure of the iron Taylor Falls bridge was improved to handle the heavier trolley cars and the increase in both trolley and automotive traffic. This line provided service from Nashua to Lowell via Hudson. Hourly trips were made during the winter months and every 30 minutes in the summer. Running time from Nashua to Lowell was about 1 hour 10 minutes at a fare of 20 cents. The fare from Hudson to Lowell was 10 cents. If you had 10 cents in your pocket you could ride to ‘the limit’, enjoy a picnic lunch, and return home later in the day. 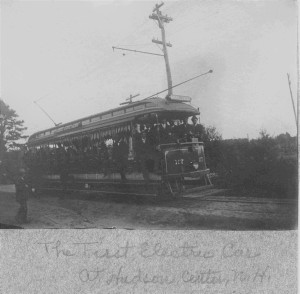 The Hudson, Pelham, and Salem street railway was incorporated by the state legislature March 7, 1889 with the authority to construct and maintain tracks from the bridge through Hudson Center and on to Pelham, Salem and the state line. This line was opened September 8, 1902. The tracks went from the bridge over Ferry Street. At the end of Ferry Street (near Burnham Road) the tracks went “off road” behind Westview Cemetery taking a sharp right turn crossing Central Street near what is now Burger King. From there it continued “off road” through wooded areas and behind the Haselton Barn on to Pelham. Relics of these tracks can be seen off to the right along parts of Speare road and again when it crossed the Gibson Road before entering Pelham. The speeds required to maintain good travel time were often times considered reckless on parts of this line. I have read that some folks even refused to ride this line and some predicted disaster.

Disaster did occur on Sunday afternoon September 6, 1903. Two cars collided on a section of track in Pelham, each car traveling around 25 miles per hour with about 70 travelers on both cars. Many of the passengers on the west bound car were returning home after a visit to Canobie Lake. The crash occurred on a hilly curve where visibility was poor. This accident resulted in 6 fatalities; and more than 40 injuries, many serious. Of those killed was Hudson Postmaster George C. Andrews. His wife Anabel received serious injuries from which she never completely recovered. The cause of the accident was a misunderstanding of the start-up orders for the train leaving Nashua and heading east. Once discovered, it was too late to stop either of the cars.

Between the huge damages and the safety factor this line was forced into receivership late 1904, was reorganized in 1907 and 5 years later consolidated into another company. The tracks for the Salem, Pelham, and Nashua line were abandoned in March 1924.

A trolley line from Taylor Falls bridge traveling north along Webster Street, through Litchfield, Goffs Falls, and Manchester was incorporated in 1905. The line opened for public travel January 1, 1907 with a 12 mile trip from the bridge to Goffs Falls at a cost of 20 cents and a running time of 45 minutes. Trips were made every hour in winter months and every 1/2 hour during the summer months.

Before the popularity of the automobile residents could rely on the trolley for transportation to/from their jobs;for travel to Nashua and/or Lowell for shopping; and for recreation!! The owners of each of these trolley lines, in an effort to increase ridership invested in destination recreation facilities on each line. Just beyond the state line on River Road was Lake View Park; on the Pelham and Salem line was Canobie Lake Park; and on the Litchfield to Goffs Falls run thee was Pine Island Park.

The 1920’s with the rise of the automobline was tough on the trolley. Ridership dropped, safety vs speed became an issue. By 1932 all trolley traffic in Hudson had ceased.  Researched and written by Ruth Parker.