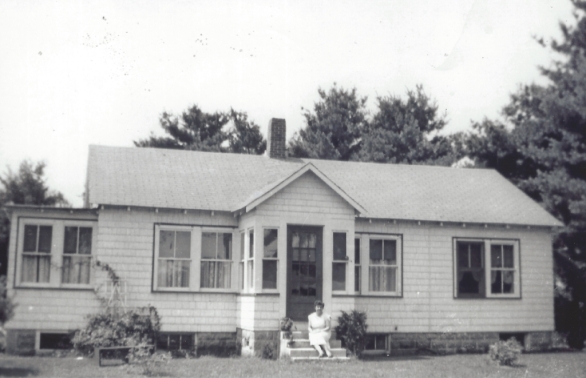 Now a dealership for previously owned cars this was the childhood home of John Simo. John was a member of the first graduation class of Alvirne High in 1951. John passed a short while ago but is fondly remembered by people in town and some of his Alvirne classmates.
By 1935 Nicolae and Cornelia Simo with their young family of Victoria and John moved from Nashua to this house at 57 Lowell Road in Hudson. The trolley and later bus services made it possible for Nicolae to commute to his job as a shoe worker at J. F. McElwain Shoe Company in Nashua. Cornelia held a position at Fort Devens in Mass. Daughter Victoria attended Hudson schools and graduated from Nashua High. She was active in 4-H, Scouts, and the youth activities of the Hudson Community Church. After High School she attended the Rhode Island School of Design in Providence. She later married and lived in Conn. John was able to complete his high school in Hudson; being a member of the first class to graduate from Alvirne in 1951. He was also active in 4-H and the youth activities of the Community Church.
This weeks photo shows the Simo home about 1947; the woman seated on the front steps has been identified as Cornelia.
John was one of many Hudson teenagers who worked at Bensons Animal Farm during the summer months. Upon graduation from Alvirne, John and a high school friend of his traveled to Seattle, WA for summer work at The Jolly Green Giant Factory. His friend returned to Hudson to attend college. John remained on the west coast, traveling and working in various states for several years. When he did return to New Hampshire he married Glenda Pratt of Milford and made his home in Milford.
Cornelia passed in 1965; Nicolae continued to live in this house until about 1984 when he moved to Milford with his son John. Nicolae passed in 1989. John remembers his mother as an intelligent woman who was fluent in many languages. His dad had musical abilities with the violin; being able to repeat a tune after hearing it a single time.
By 1984 Lowell Road was becoming a busy commercial road; no longer the rural and residential road of the previous decades. As with many homes along Lowell Road this one at number 57 would transition into commercial use. Many of our readers may recall Dunkin Dogs, a self service dog shampoo parlor and grooming establishment. Today this site is the location of Stellar Motors, a used automobile mart. Thanks to John Simo of Milford for the memories; photo from the Hudson Historical Society collection.

By Ruth M Parker in Lowell Road, Revisit, Uncategorized on May 4, 2019.
← Do You Remember Fast Day? The Old Youth Center aka the “portable” →