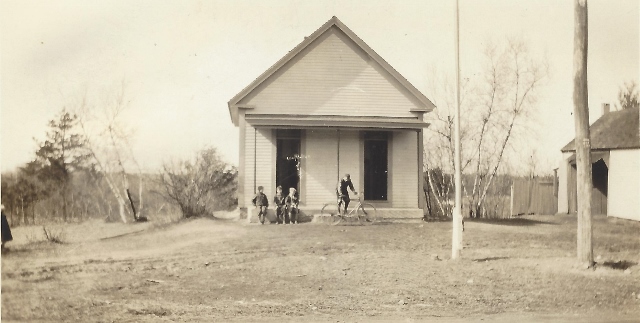 Of the ten district schools number 9 is the only house remaining. Each of the others have been demolished and replaced with a dwelling or converted into a dwelling. Number 9 is privately owned by the Jasper Family and was restored by Shawn Jasper in the late 1970’s.

Before 1886 the No 9 house (Kidder District) house was located on what is now Robinson Road. The approximate location was on the left side of Robinson (as you turn up the hill from Old Derry Road) towards the top of the hill. The No 10 house (Hills Row District) was located on what is now Old Derry Road (earlier Derry Road) just north of the intersection with Greeley Street. These two districts were merged into a single district and this No 9 School House was built by the town of Hudson in 1886. It operated as a one-room school house until 1932. In the mid-1930’s Grant Jasper purchased the property from the town. The No 9 Schoolhouse is the only one which survives intact as a school house. In the late 1970’s it was renovated by Mr. Jasper’s grandson, Shawn. The school house is owned by Jasper Corporation. 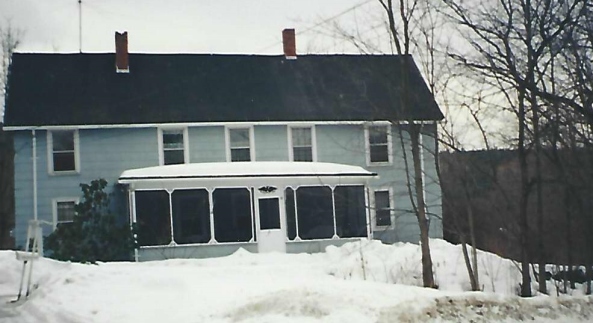 Paul W. Hills is the last Hills descendant to live on Stoney Ridge Farm at 25 Barretts Hill Road. Paul was born in Marlborough, MA to Orlando Greenleaf and Lillian Hoffman. He grew up on a farm and was educated in schools local to that area. Paul proudly served our country in the Korean War and was discharged as a Corporal. Paul and his first wife Patricia had a family of one son, Paul W. Jr., and two daughters; Nancy and Cynthia; each of whom have families of their own and are living outside of NH. It is notable that in addition to Paul Sr. each of his children also served in the military. Patricia and Paul are divorced and Patricia lives elsewhere in NH. After returning home from the service Paul enjoyed a career as a truck driver until his retirement. He had a passion for farming; raising animals, birds, horses, cows, and pigs. About the time of his retirement Paul and his second wife Margaret moved to Hudson to live with his Aunt Sylvia (Hills) Flemming. He remained a resident of Hudson and Stoney Ridge Farm until his passing in April of this year. Those who knew Paul remember his garden, his peacocks, chickens, beef cows, and his love for the outdoors; traveling his acres on his ‘trike’ when walking became a challenge.

Silas Hills was the earliest ancestor in Paul’s direct line to settle on Barretts Hill. Silas was born 1813 in Windham. His parents were Jeremiah (b:1773 in Nottingham West) and Margaret Davidson (b:1781 in Windham). By 1837 Silas married Roxanna Farnum of Londonderry. Not sure when he actually began working his farm in Hudson but it was between 1841 and 1844. He operated a saw mill and grist mill on nearby Glover Brook whenever there was sufficient water flow to provide the necessary power. He did have some successful years but ultimately the mill fell into decline. Silas and Roxanna had 1 daughter, Addelisa; and 3 sons, John, George, and Orlando G.

Orlando G. (b:1855) remained on the family dairy farm and married Antoinette “Nettie” Young of Hudson in 1889. According to the 1892 map of Hudson and old deeds, Orlando G. and Nettie lived in the 25 Barretts Hill Road farmhouse. This map shows a cellar hole on the opposite side of the road which had been occupied by Silas. A part of the farm house dates to 1791.

Orlando and Nettie had 1 daughter (Sylvia B 1897) and 3 sons Orlano Greenleaf Jr. (b:1890) Harland (b:1891) and Lyman (b:1894). The 3 brothers served in France during World War I. Lyman had a 32 year career with the US Infantry beginning with the China Expedition and continuing to World War II. Orlando Greenleaf, Jr moved to Marlborough, MA where he and Lillian Hoffman raised their family of 3 daughters and 2 sons, the youngest being Paul W. Harland and Sylvia remained on the farm in Hudson. Over time ownership of the farm passed from Nettie to her daughter, Sylvia.

Sylvia Hills attended St. Josephs Hospital School of Nursing and was certified as a Registered Nurse in 1929. By July 1941 she married Alfred Flemming and they settled on the farm. Alfred conducted the farming operations and Sylvia continued her nursing career engaging in private duty work and later operating a nursing home at her residence. Alfred and Sylvia decided upon the name ‘Stoney Ridge Farm’ even applying to the State of NH for the use of that name. Sylvia was well known and respected in Hudson: a member and deacon of the Baptist Church, serving on the Historical Committee of Hudson Fortnightly Club, a founding member and director of the Historical Society, and a member of both the National Society Daughters of American Revolution and the Ladies of the Grand Army of the Republic. Alfred passed in 1965 and Sylvia continued to live on the farm, phasing out her retirement home over time. By 1980 Sylvia’s nephew, Paul, moved to the farm, thus keeping the farm in the Hills family.

Some readers may ask what the relationship is between Paul W. Hills and Dr. Alfred K. Hills. Their family lines merge at their common ancestor, James Hills (b:1697). James was the youngest of the three grandsons of Joseph Hills who built and settled the Hills Garrison.

In 1989 Stoney Ridge Farm received an award from the United States Department of Agriculture; recognized for being in the same family since the birth of the US Constitution. This award went to only two farms in Hudson and only a handful in the state of NH. From that day forward Paul proudly displayed his Bicentinial Farm sigh next to the Stoney Ridge Farm sign.

When Silas settled in Hudson this section of town was a wilderness dotted with a few farms. Today we find the Stoney Ridge Farm to be 45 acres of undeveloped farmland and woods. A haven and refuge for wildlife, surrounded by hundreds of acres of residential land and commercial development plus some acres waiting to be developed. In 2001 Paul Hills entered into an agreement with the town of Hudson which, in essence, was designed to protect this 45 acres from being development. Mr. Hill sold the development rights of his farm to the town of Hudson. This farm land is no longer owned by a member of the Hills family. It was recently sold by Paul’s estate to a local homeowner. This person owns and has use of the land for agricultural purposes. The photograph of the Hills farmhouse is from the collection of the Hudson Historical Society.

A typical district school was very basic.  A single classroom where students of multiple grade levels were taught by a single teacher.  There were usually two doors; one to be used by the girls and the other by the boys.  Classroom was heated by a wood stone.  And, by the way, there was no interior plumbing.  The outhouse was located to the rear of the building.

Early school history of Hudson shows the town divided into 10 districts, each with its own school house.  Shown here is a sepia photo of the No 1 District Schoolhouse known as Musquash. with some of the students standing in front.   The school was located on the east side of the Back Road (now called Musquash Road) at or near the site of the First Meeting House. This house was used for school purposes until 1933.   Relics of the foundation of this school house can be seen in the wooded area behind the marker for the First Meeting House at Musquash. 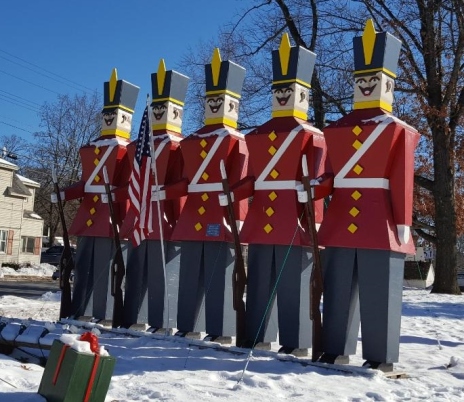 Last week as I drove south on Derry Road and passed Library Park I noticed crew from our Highway Department placing the toy soldiers on the north corner of the park. As I continued on my way to my appointment in Nashua I recalled some of the history behind these and other decorations on the park. Perhaps it is no surprise how much these decorations are intermixed with Arthur Provencher and his vision to develop Benson’s Animal Park into a theme park,

Each of these painted wooden soldiers stand 12 feet tall and they delight the holiday spirit in each of us with their red and blue uniforms with yellow diamond-shaped buttons. With their white belts they stand at parade rest with their bayonet-tipped rifles at their side. Each has the same plumed hat and facial expression. They can stand in any order but the soldier holding the flag should be in the center.
So you ask: What does all this have to do with Bensons Park? During the Christmas seasons of 1980 and 1981 Arthur Provencher, then owner of Benson’s Animal Park, decorated his park with hundreds of thousands of lights and decorations for the holiday season. These wooden toy soldiers were a part of that display. Even though some 35,000 came to enjoy these sights and activities, that elusive break even point could not be reached. His “Christmas in New England” lasted for only a few years. The tradition of holiday decorations at Library Park was started by Mr. Provencher as a way of advertising the holiday events at Benson’s Animal Park. Over time this tradition was continued by the town. The five toy soldiers were purchased by the Chamber of Commerce and donated to Hudson with a plaque “Dedicated to people of Hudson by the Hudson Chamber of Commerce December 1995. Our first photo shows a brochure, complete with a coupon of 50 cents, used by Mr. Provencher to advertise his ‘Christmas in New England” tradition during the 1891 season.

As time progressed the soldiers were in need of repairs and paint. In February 2004 the soldiers were delivered to the wood shop at Alvirne High School where, under the direction of John Conrad, the Building Trades class repaired and painted the soldiers. When completed they were stored by the Highway Department for use in many seasons to come. Our second photo shows the five toy soldiers standing guard over the 2018 holiday season at the north end of Library Park.

Another remnant of Benson’s is the traditional nativity scene tucked away behind Plexiglas in the old town trolley stop. This stop once provided a waiting place for travelers using the electric railroad from Nashua, through Hudson, to Hudson Center and on to Pelham. During the holiday season the stop is used to house the creche from Benson’s. The Christmas in New England brochure is a part of the Benson’s documentation at the Historical Society. The 2018 photo was taken by the author.