In reality the Jasper Farm Stand on Derry Road, opposite Connies, was not a restaurant. The stand did offer B B Q chicken, dairy products, and farm fresh eggs! A place which few of us remember!! 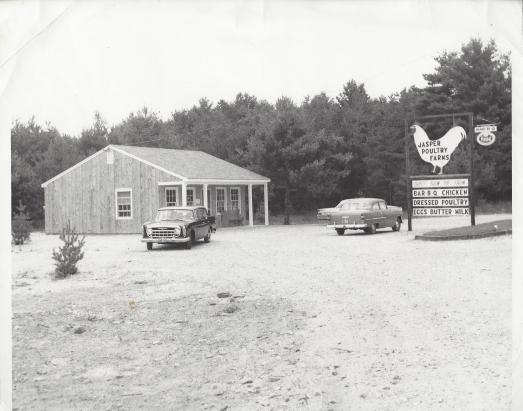 By the late 1950’s the State of New Hampshire had re-routed Route 102 (Derry Road) just north of the Hills House to proceed north through parts of Litchfield, then back into Hudson, then forward to Londonderry and Derry. Before that time Route 102 followed what is now Old Derry Road; past Jasper Farms, Nadeau Farm, the Hudson speedway and on to Londonderry and Derry. This new highway removed much of the traffic from Old Derry Road; at the same time the new highway created business and retail opportunities on previously undeveloped land.

In March 1960 Jasper Farms under the management of Robert Jasper purchased 5 1/4 acres of land on the new highway opposite what is now Connie’s Plaza. Shortly after, in an effort to expand local retail presence and take advantage of the new highway, Jasper Farms open their farm stand at what is now 296 Derry Road. By looking at our first photo we see one could purchase farm fresh eggs, Bar B Q chicken, ready to cook chicken, as well as some Hoods dairy products.

This retail store did not survive for long. By June 1968 the 5 1/4 acre parcel was sold to Bernie and Phyllis McArdle. Bernie established his Home Decorating Center where he sold wallpaper, paint, and provided paint contracting services.

As time went on the property was subdivided and the building expanded to accommodate two businesses. The building has been used for R + S Supply by Bob St Onge, K + M Trailer Sales by The Kierstead Family, and One Stop Auto Parts. By February 1981 it was purchased by Gerald Desrocher for D’s Auto Body; a business which continues to this day under the management of his son, Scott. 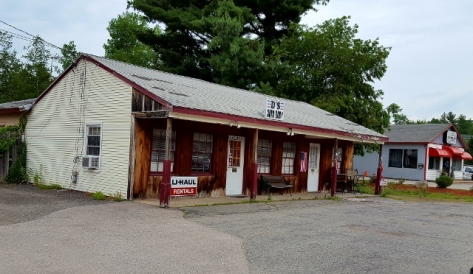 Our first photo is compliments of the Jasper Family and the second was taken by the author. Both photos are part of the Historical Society Collection.