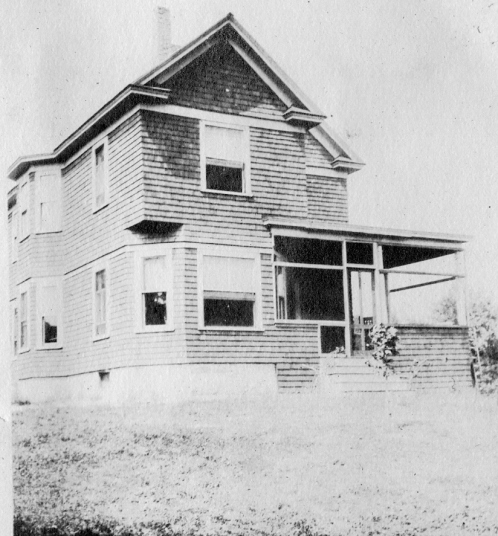 This week we explore the family neighborhood on Central Street in Hudson Center known as “Parker Row”. This includes the even numbers (north side) of Central Street from 194 to 208 plus one site on the south side, that of 203 Central, the location of Benson’s Bakery. Referred to as “Parker Row”; but, the more I learn about the families who lived here I realize there were as many Smith’s as there were Parkers! Let me share some of what I learned!

In 1890 there was one Smith family and one Parker family living in the neighborhood and all of the subsequent Smiths and Parkers who resided here through the years were descended from these families. In fact, at one point the families intermarried!

The “root “Smith family was that of Isaac Newton and Roxanna (Butler) Smith. Isaac was a Hudson native, born in 1841. His wife Roxanna was born 1842 in Pelham. Their family consisted of three sons; Herbert Newton (B:1864), Arthur Winslow (B:1869) and Perley Butler (B:1871). In 1890 their family of five was living at what is now 194 Central Street. Isaac Newton was a carpenter and a builder; a trade that each of their three sons also adopted! History tells us that Isaac Newton was contracted by the Methodist Church to erect their parsonage at the corner of Baker and Highland Street. He was also the builder of the Baptist Church parsonage when it was located on Greeley Street. All three of their sons and two of their grandsons remained in or returned to this neighborhood to establish homes of their own.

The “root” Parker family was that of Charles Clarence and Lydia Low (Batchelder) Parker. Charles was born 1852 in Warren, NH. His wife Lydia was a Hudson native born 1852. Ttheir family consisted of three sons and one daughter: Clarence Charles (B:1874), Lydia Jane (B:1877), George Henry (B:1879), and Ernest Josiah (B:1883) all native to Hudson. In 1890 this family of five was living at what is now 200 Central Street. Charles had moved from Warner to Nashua to attend school. He later established a bookstore and publishing business in Nashua and purchased his home on Central Street. Of their sons, Clarence became a minister and relocated to various towns depending on where he was serving. Ernest passed away during his teen years. Their daughter Lillie married Herbert Newton Smith in 1906 and they built their home adjacent that of her parents. at what is now 204 Central. Likewise George, a builder by occupation, remained and built his home next to that of his sister.

About this time Mrs. Nancy Merrill, widow of Joseph Merrill, was living west of the Parker home and adjacent to the brook which now bears her name, Merrill Brook. After her passing a part of her estate, including her homestead, was purchased by the Parkers. Here is a brief history of each home as we see them today, beginning with 194 Central and moving west.

We are not certain when the house at 194 Central was built but we do know that Isaac Newton Smith lived there in 1870 and likely before. By 1906 his oldest son, Herbert Newton, and Lillie Parker married and moved into their new home at 204 Central. About the same time his youngest son, Perley, built his home at 196 Central on a piece of land from his father. 194 Central then became the family home for Arthur Winslow and May Louise (Snow) Smith and their sons Byron Butler (B:1910), Gardner Isaac (B:1912), Eliot (B:1915), and Edward (B:1918). Arthur passed in 1926. May married a second time and continued to raise her family in this home. Byron Butler and Gardner Isaac remained in the neighborhood; Eliot and Edward moved elsewhere. By 1936 this house was owned by Luther and Victoria Knights; by the mid 1940’s it was owned by the Pelletier Family. 194 Central is currently a multi-family owned by Floyd Gorveatt.

The house at 196 Central was the family home for Perley Butler and Elizabeth (Robbins) Smith and family of 2 daughters and two sons. Their oldest daughter, Ruth Elizabeth (B:1895) married Everett Hamblett and they lived and worked in Hudson Center. Their youngest daughter, Eva Roxanna (B:1897) married Albert Eaton. Their sons were Orin Newton (B:1899) and Neal Onslow (B:1901); each of whom move from the neighborhood. Perley lived here until a short while before he passed in 1961. By 1962 Gardner Butler and Ruth Athalie (Henry) Smith purchased the home from his estate. Prior to this time they were living at 208 Central; they sold the house at 208 and moved into his uncle’s home at 196 with their family. Ruth Athalie passed in 1977 and Garnder in 1985 at which time the house was sold by his estate to Ronald and Nancy Graven.

The next house, 200 Central, was the family home of Charles Parker and later more recently his granddaughters Florence and Ernestine. The Parker family built a home (202 Central) on the hill in back and overlooking Central Street. This was a rental home until 1946 when it was sold to Byron Butler and Maude (Chamberlain) Smith. This was their home until 1953 when they moved down the hill and purchased the 203 Central Street site. They live the remainder of their married live here. Byron passed in 1961 and Maude in 1971. The original house has been expanded and the site converted to a commercial complex. Benson’s Bakery is located in that section which was the home of Mr and Mrs Smith.

Adjacent to the Parker homestead was the home of Herbert Newton and Lillie (Parker) Smith at 204 Central. Our first photo shows their home circa 1910. They had one son, Newton Parker (B:1907). Newton was educated in Hudson schools and then Nashua High. Following high school he had plans to attend college; but, unfortunately he was killed in a motorcycle accident. He was a passenger in a side car when the cycle left the highway and crashed. Herbert and Lydia Smith continued to reside at 204 Central. They had no further children of their own but a niece, Mildred Parker, came to live with them until her marriage to Joseph Boulanger. Following the passing of Herbert Newton in 1928 Lydia remained on Central Street. She was active as a Christian Science Practitioner until just before her passing in 1964. Our first photo shows their home at 204 Central Street soon after it was built. It has since been the home to Harold and Vivian Moore and until lately home to the family of Edward Curan. The house remains to this day.

The house at 208 Central, see second photo, was likely built by George H. Parker about the time of his marriage to Edith Florence Snow in 1908. Their family consisted of Claudia (B:1910) and George Henry, Jr (B:1912). Claudia married Richard Boucher and they lived in Hudson Center. George , Jr moved to northern NH, near Franconia, and went into business and raised a family there. By 1944 this was home to Gardner Isaac and Ruth Athalie Smith and their family of Janet Athalie, Gordon Henry, and Evelyn. In 1963 the Smith’s sold the property to George and Mary Johnson and moved into the former home of his uncle Perley. The Johnson’s refurbished the building and established Hudson Animal Hospital. That business remains to this day although the ownership of the property has changed through the years.

Given this neighborhood history perhaps we should revise history and call this “Smith-Parker” Row. Photos are the courtesy of June Parker.