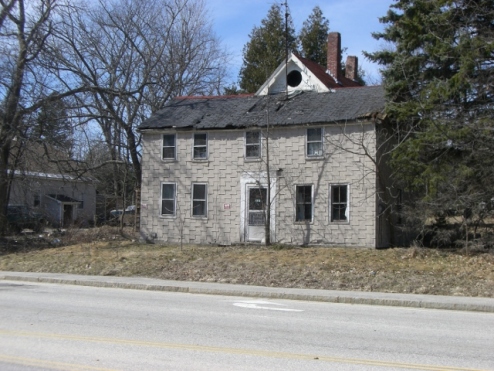 The McCoy Home on Central Street

This house which stood at 192 Central Street was home to as many as 5 generations of McCoys. The earliest McCoy we find that lived here was James Otis McCoy, born 1788 in Windham, NH. He purchased this location and a corresponding site on the opposite side of the road from Abigail Chase in 1859 when he was 71. Ownership of this homestead passed from James Otis to his grandson James (B:1846), then to Herman Richards (B: 1878) and then to Herman’s daughter and son-in-law,Thelma McCoy Ives and Merrill ‘Joe’ Ives, Herman’s widow, Ethel Augusta Woodward, continued to reside there until she passed in 1968.

The younger James McCoy was born in Boston, MA in 1846 and came to Hudson with his parents, Daniel Gregg and Harriet (Barrett) McCoy, at the age of 6 weeks. By 1856 his father Daniel Gregg passed at the age of 41. James was 10 years old. By 1863, when James was 17, his mother Harriet passed at the age of 51. When he was 19 James enlisted in Company I First NH Heavy Artillery volunteers. Returning to Hudson after his service in the Civil War he purchased the McCoy homestead on Central Street from his grandfather, James Otis, in 1867.

On December 2, 1868 at the age of 21 James and Emma Cinderella Richards were married in Hudson. They lived their 26 years of marriage in this McCoy home. During this time they raised a large family. James passed in January 1915 after a period of poor health. He was survived by six children: James Otis of Manchester; Mary Haselton of Hudson, Herbert W. of Shirley, MA, Herman Richards, Daniel Gregg, and Elgin Leon all of Hudson. He had been predeceased by his wife Emma Cinderella Richards. James was known as a quiet man who was well liked by his fellow townspeople. Of his surviving children Herman, Daniel, and Elgin are significant to the history of 192 Central.

Herman received title to this Central Street home in 1915; 1/3 by will from his father James; 1/3 from his brother Elgin; and 1/3 from his brother Daniel. In October 1916 at the age of 37 Herman and Ethel Augusta Woodward were married in Nashua. Herman and Ethel made their home in the house where he was born. They raised a family of 2 daughters, Mildred (b:1918) and Thelma (b: 1925) and 1 son, Robert (b:1922). Mildred married and moved to Nashua. Robert moved to Illinois. Thelma married Merrill “Joe” Ives and they remained local.

Herman was employed with B&M Railroad, Maine Manufacturing, and later with Beede Ruber Co. For many years he served as superintendent and secretary of Westview Cemetery which was located adjacent to the rear of his house. His widow, Ethel, continued to reside here until she passed in February 1968. Thelma and “Joe” Ives purchased the McCoy home and resided there until the time of their divorce when it was sold to John C. Graichen who resided there for several years. Following the passing of Mr. Graichen it was sold to the family of Michael Dumont and later to his son Donald. Our photo of the house was taken by the author in 2010, following several years where the house was unoccupied. Soon after this photo was taken the building was razed. The lot at 192 remains vacant to this day. Thelma (McCoy) Ives remarried to Al Carroll. Thelma Carroll passed in 2017.