The “Bee Hive” on Central Street 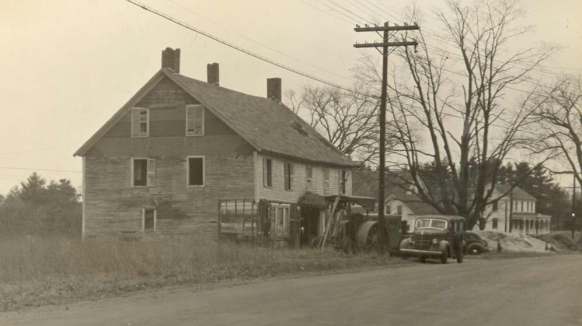 The “Bee Hive” on Central Street

We’ve heard the expression “A picture is worth a thousand words”. That is the case with this early 1940’s photo of the house, known as “the bee hive” located on what is now 73 Central Street; opposite what many remember as the home of Leon and Gerri Hammond. To the right and slightly behind this house we see two homes; the right most of these is located at 65 Central Street, home to Henry Frenette. The second, smaller home, is at 1 Lowell Road and home to Alfred Bastien.

A few first hand memories have been documented about the “bee hive”. The first is from Maurice “Nick” Connell who grew up in Hudson and later recorded some of his memories via a series of occasional articles in The Hudson News. In one such article (August 24, 1984) “Nick” recalls the “going’ swimmin'” routine of his gang of friends in the 1930’s. They would swim and dive in the Merrimack River near the railroad bridge abutments; then walk the tracks to the Lowell Road underpass and explore the “old haunted house” on Central Street near the overpass. He remembered this two storied, weather beaten structure also known as the “bee hive”. This nickname was applied to the house because of the strange and shady goings on there. This reputation added to the excitement of the barefoot summertime explorations of a group of young boys. They would walk the tracks to Melendy Pond, another popular “swimmin hole”. According to Nick, this house was torched by some unnown arsonist on November 1, 1945 and torn down on November 27, 1945.

Another memory of this house was left by Leo J. Gagnon. He recalled Anton’s restaurant and their parking area on the opposite side of Central Street – where a house called the ‘bee hive” once existed. By his memory this house was a half-way house. Other memories I have heard suggest it was a frequent and convenient “overnight” stop for individuals catching a free ride on the train as it passed through Hudson then on to West Windham, and Rochester, NH.

Speaking of the railroad, the second photo shows a portion of the Hudson zoning map for 1942 from the Hudson Town Report. This map traces the route of the steam railroad from the river to the overpass at Lowell Road where the tracks crossed over Lowell Road and ran behind the ‘bee hive” house and continued on to Melendy Road, “Long crossing” and Hudson Center.

A few additional details are known about this house. According to the town report for 1947, the Walton land on which was situated the so called “bee hive” was purchased (at least in part) by the Town of Hudson from the State of NH.

By 1870, and possibly before, this house was home to Samuel Walton, (age 49), his wife Fanny (age 48), and their daughter Sarah (age 21) and son James (age 19). Samuel was born about 1817 in England and was employed in a shingle mill. Based upon census records Samuel lived here until his death in February 1892, at which time the home was passed to his daughter, Susan (Walton) Brown, and his son, James Walton. His wife, Fanny had predeceased him by a year. At the time of his death he had an ownership interest in the Melendy Mills. With Central Street in your front yard and the railroad tracks in your back yard, the lot upon which this house existed was likely reduced in size and attraction through the years. By 1897, Susan and James sold the house to William Fitzgerald of Nashua. Samuel Walton purchased the property from Joseph Fuller and Fred Steele in 1868. After being sold by members of the Walton Family this house had a variety of owners, tax issues, and foreclosures.

In February 1999 in an effort to remember those fire fighters who had fought and those who have fallen the Hudson Fire Department announced they were seeking to build a new and larger memorial. A modest memorial for fallen firefighter James Taylor did exist in front of the Library Street Station. Their plan was for a larger memorial which would be dedicated to all men and women of the Hudson Fire Department. A Memorial Committee, chaired by David Moran was organized and they proceeded to design and raise funds for such a memorial. The committee reached out to town and school officials for a suitable location. A number of sites were considered and by April 2000, their plans had cleared the final hurdle. Ground breaking began and by May 21, 2000 the Hudson Fireman’s Memorial was dedicated upon a grassy knoll at the intersection of Central Street and Lowell Road. The location of this memorial has been named Hammond Park in memory of firefighter and neighbor Leon Hammond. Hammond Park and the fireman’s memorial is located upon or near the site of the Samuel Walton home, more recently known as the “bee hive”.