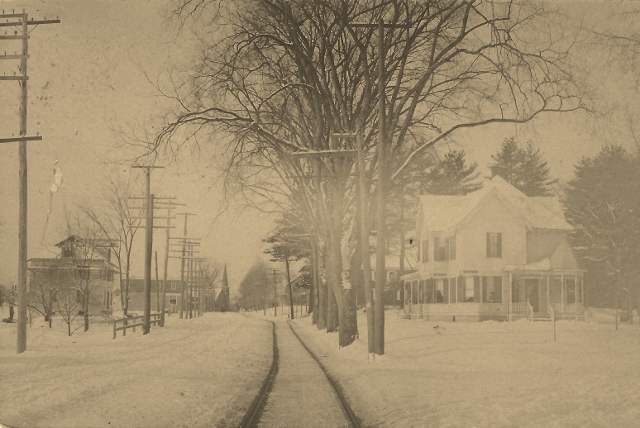 A  trolley traveling along Central near Library Street has exposed the rail lines after a recent snow storm as shown in this C 1907 post card. By 1907 the Bridge section of town, including this part of Central Street, was developing as a residential and business center. This was facilitated by the public transportation between Hudson and Nashua on the trolley.
The Methodist Church and parsonage previously located on Central Street near Melandy Road had burned in 1879 and the parish made the decision to relocate closer to the bridge and the trolley stop. The steeple of the new brick church,  built in 1880, can be seen towards the center of the photo on the left side of Central.
Another new building at that time, the IOOF building (also called Association Hall), is visible just this side of the church.  The IOOF building was completed by 1905 and it soon became their  meeting place plus meeting space for  the Rebekah Lodge, and Hudson Grange.   Association Hall has a long history of usage for Hudson; once owned by the town and used as a school class room, it is now owned by the American Legion.
The house on the right, now 39 Library Street, was home to Helen and  Hannah Georgina Gillis, daughters of the late Jennie (Fulton) and John Gillis.  John Gillis purchased the colonial home on this site from Zachariah Hardy and just a few years before this post card  replaced it with this house which was modern for that time.    John Gillis and later his estate owned much of the land in the area of Central, Gillis, and Fulton Streets.   Following the passing of their parents Georgina and Helen continued to live here.  Helen passed at the age of 78 and Hanna Georgina at the age of 77; both passing on the same day in 1925 as they became victims in a double murder which occurred in their home.    Their funeral service was held at the Congregational Church on Central Street with an atmosphere of simplicity, reverence, and sadness.
By 1934 this was home to  Michael and Sophie Stanapedos.  Michael passed in the late 1960’s and Sophie continued to live here until the 1980’s.  In 1983 it was purchased from her estate by John Sarris and remodeled into an office building appropriately called “Sophie’s Place”.
The house on the left of Central at the corner with Gillis Street has been a Connell Family home for over 75 years.  Occupied by Frank and Mary Connell it is now owned by the family of his son, Philip J. and his wife Lucille.
This post card is from my private collection, being mailed to my great-grandmother in 1907.  It will soon be on file at the Historical Society.