The elegant summer home shown in this photo, became the summer residence of  sisters Mary and Caroline and the family of Caroline (Pollard) and George Parker.  It was located directly north of the Pollard/Hardy  farmhouse and on the same side of the road at what is now 203 Lowell Road.  Caroline’s family consisted of four girls:  Edith, Helen, Marion, and Caroline.  In years to come Caroline’s grandchildren would also enjoy their summers on the family farm here in Hudson.  This photo  from the Historical Society collection shows the rear view of the summer home as it overlooks the fields and river. 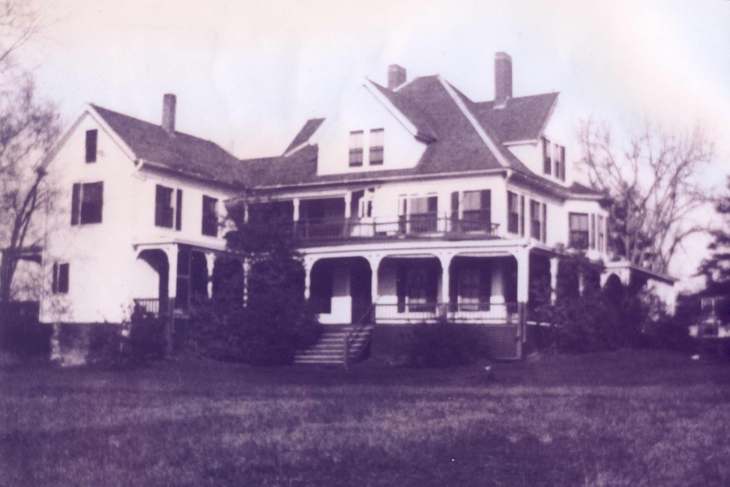 We are uncertain when this home was built; but would estimate about 1900.  We do know that by 1915 Mary, Caroline and her family enjoyed their summers at this Parker Summer Home called “Fair View”.  It was so named by the family because of the countryside viewed from the home.

By 1946, after the passing of Edith Parker and after World War II the remaining members of Caroline’s family decided to sell the farm; the entire farm, including three houses, was to be sold as a single transaction.  By May 1946 John Hardy purchased the Luther Pollard farm from Luther’s descendants.  By December of that same year the summer home “Fair View” was subdivided and sold to Putnam Stearns as a family home.  It was later sold to become a nursing home, called Fairview, operated by Mr and Mrs Coulter and Mrs Blacktin.  Ove the years and as a result of modernization the original building has been completely replaced. It now includes the complex of Fairview Nursing Facility, Rehabilation, Laurel Place, and The Inn at Fairview.

Hudson resident Ellie (Gowing) Freeman remembers the original building as she, at the age of 16, worked for the nursing home.  Resident Leo Demers was a child-hood friend of Francis “Fran” Coulter.  These boys often sat on the stone-wall entryway uprights to Fairview and wave to passing vehicles on the two lane Lowell Road.  These vehicles were mostly farm tractors and hay bailers.  Today, the road is four lanes and even trying to walk across the road is almost impossible.