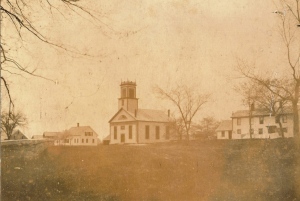 This C1888  photo of the Hudson Center Common shows the view from the home of Eli Hamblet  on Hamblet Avenue.  Straight ahead is the Baptist Church, the church where he was elected as deacon just a few years earlier in 1882.  The large vestry has not been built, but I am certain the need for it has been discussed among the members.  To the right of the church is the home of Mrs. Mahalia Greeley; the widow of John Greeley, MD.  To the left of the church is the home of Daniel Greeley.  Daniel was known to have a good nature and he was well liked within the community.  In the foreground and on the left of the photo is the Old Hudson Center Cemetery.  Up until a few years prior to this photo the cemetery was in disrepair and the town was considering moving the remains from this site so that the size of the common could be increased.  This proposal did NOT meet with public sentiment and, as it turned out, a former resident of Hudson , John Foster, made a proposal to the town that he would build a stone fence and clean up the cemetery if the town would maintain it.  Imediately beyond the cemetery is a roof of a barn; possible from the barn connected to the Henry Brown House on the opposite side of the common.  Photo from the Historical Society Collection.