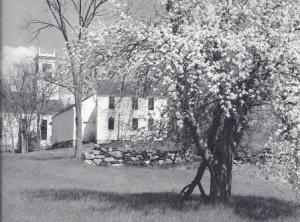 The first established post office in Hudson was at Hudson Center.  The Postmaster, Reuben  Greeley, used this ell  attached  to the west side of his house for the Post Office.  This 1960 photo shows the back side of the ell from the field located  at what is now 230 Central Street; the  7-11 Convenience Store.  Reuben served as postmaster from 1818 until 1829 and then again from 1849 until 1853 after which the  Hudson Post Office was moved to the bridge area.  This ell was a part of the Greeley/Wentworth property when purchased by the Baptist Church in 1962.  A few years later the large section was removed for safety reasons and the  remainder  configured into a garage.  This garage has since been removed also.  From 1876 until 1910 the  Hudson Center Post Office was located in the Railroad Depot.  So, for a period of 34 years the town of Hudson had two post offices; one at the bridge ad one at the center.  This photograph is used here by permission of Hastings House Publisher the publisher of “The New England Image” by Samuel Chamberlain.