As we continue to revisit rural Hudson we stop at Smith Farm Stand on Kimball Hill Road.

With this week’s photo of The H.E. Smith Farm Stand on Kimball Hill Road we get to visit with another Smith Family in Hudson. By 1924 Elmer Frank and Ethel May (Connell) Smith and their young family of 2 sons (Henry Elmer and Robert Connell) and 2 daughters (Elizabeth Ella and Gloria Lillian) settled on a 300 acre parcel of land on what was then known as Pelham Road, now Kimball Hill Road. The location of the Smith parcel is at and near the intersection with Gibson Road and near the town line with Pelham.

Recently married Henry Elmer and Mary (Kayros) Smith began their dairy farm on a portion of his father’s land in 1933. At that time there were about 70 farms of various sizes in Hudson. Henry and Mary established their home around the corner of this farm stand on Gibson Road. Their they raised a family of 3 boys (Dustin, Tom, and Tim) and 1 girl (Nancy). The family continued with the dairy farm with all members helping out where they could. In 1963 they gave up dairy farming and switched to plants and vegetables and opened the farm stand as means to marketing their produce. This established a tradition which Henry’s son Tom has stayed with and has continued to the present with his own son, Dylan. Management of the farm and farm stand was passed from Henry to Tom in 1977.

Gloria and Elizabeth, sisters of Henry remained in Hudson after they married. Gloria continued to live on the family homestead and married Leslie Binks. Leslie was an animal trainer for Benson’s Wild Animal Farm; Gloria became became a prominent business woman and leader in Hudson. Her sister, Elizabeth married Richard Albee and they settled on Greeley Street; living there for many years and then moved to Alaska.

After raising their family Henry and Mary divided their home into 2 living quarters. Tom, his wife Tina, and their family lived there along side his parents. Henry passed in 1991 at 80 years of age; Mary passed in 2004 at the age of 94. Both remained on and helped with the work of the farm as long as they could. Today operating the farm remains a family affair: Tom, his wife Tina, their son Dylan, and a sister-in-law Charli. Tom’s daughters and his brother, Tim, helps with the operation from time to time.

The Smith Farm specializes in home grown vegetables and plants. It is estimated that over 90% of the products they sell were grown or started on their own farm. Often the stand will remains open through the holiday season specializing in holiday trees, wreaths, and kissing balls. The kissing balls are made by the Smith family; trees and wreaths are brought in from a reliable grower.

By February of next year work will begin in the various greenhouses starting a wide variety of veggies and flowers for both their own gardens and to sell in the farm stand as starter plants. When I talked with Tommy he said…”we’ll be here next year!!”

The Smith family has been farming on Kimball Hill Road since 1933. First Henry and Mary with help from their growing family. The oldest, a daughter Nancy, married and moved to Illinois and raised a family there. Dustin, the oldest brother, remained in the neighborhood and a close brother and friend with Tom, but opted for a different career path. He and his wife, Susan, began a computer business called ‘ComputerSmith’ in the 1980’s. Dustin lived nearby,just a quarter of a mile from brother Tom in the original Smith family homestead. Younger brother, Tim, lives in Hudson and helps with the work of the farm from time to time. The third generation, Diyan, works along with his father Tom.

The photo of the Henry E. Smith Farm Stand C 1980 is from the photo collection of the Hudson Historical Society.

The Family of John Henry Baker 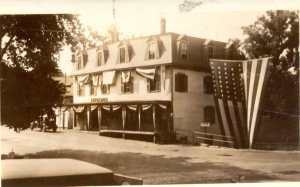 This is the first of two articles recalling the family of John Henry Baker and the ‘laying out’ and early development of Baker Street. This week we look at the descendants of John Henry and some of the contributions they made to our town.

John Henry was the first Baker of this line to move to Hudson. He was born in Manchester, NH November 1822 to Jesse and Sally (Howard) Baker. Jesse was a stone mason and a farmer and he resided in a number of places including Pelham, Windham, Manchester, and lastly Hudson.

By December 1846 John Henry married Lovisa Underwood Webster in Hudson. She was born in Pelham January 1824 a daughter of John and Hannah (Cummings) Webster and a     sister to Nathan, Moses, and Kimball Webster. At the time of their marriage he was living in the Manchester area and after their marriage they remained until some time between 1856 and 1859. Like his father John Henry was a stone cutter. John and Livisa had two sons and two daughters. Their first child, Ida Ella, was born in Pembroke September 1853 and passed before her second birthday. Their second child, John Julian, was born in Pembroke August 1856. The remainder of their family was born in Hudson; a daughter Mittie born December 1859 and a son William Wallace born September 1865. After moving to Hudson John Henry continued his occupation as a stone cutter. In 1863 he registered for the Civil War draft as a stone cutter. By 1870 he was listed as a farmer. He attended the Methodist Episcopal Church here in Hudson and was on the committee to build the brick church in 1880 after fire had destroyed the church and parsonage on Central Street near Melendy Road. John Henry lived out the remainder of his 93 years as a farmer in Hudson. He passed in January 1916 and was laid to rest in Sunnyside Cemetery.

After moving to Hudson with his parents as a young child John Julian received his early education in the local district school, perhaps attending school at #8 District on Derry Road. His higher education was at the Nashua Literary Institution and Pembroke Academy. In 1876, at the age of 20, he began working for his uncle, Nathan Webster, as a clerk in his grocery and grain business. This employment lasted until 1885 when he was appointed to the U.S. railway mail service running between Boston and Keene, NH. Four year later he returned to Hudson.

William Wallace received his early education in the local district school, perhaps attending the same #8 as his older brother John. William’s higher education was from the McGraw Institute in Reeds Ferry. In 1885, at the age of 20, he likewise entered the employ of his Uncle Nathan as a clerk and was soon appointed Assistant Post Master, a position he held until 1890.

In October 1890 brothers John Julian and William Wallace Baker took over and expanded the building and grocery business from their uncle. The Baker Brothers’ building was the location of the early post office at Hudson bridge when the Democrats were in office. When the Republicans were in office the Post Office would re-locate across the square in Daniels and Gilbert. The Bakers’ Building had a long history dating back to the 1860’s. Owners were James Carnes, then Nathan P. Webster, and then John J. and William W. Baker and later Sidney. After operating for two generations it was sold to the Rodgers Family of Hudson prior to being demolished as part of the bridge revitalization.

In the mid 1920’s John Earl took a trip to California and visited Hollywood. After returning home he started a theatrical production group called Hudson Players. He and Vera Tieiney married in November 1927. After his uncle, John Julian, retired as town clerk and treasurer, John Earl was elected. He converted an old roadside farm stand used by Vertner Fogg for the sale of veggies into an office from which he conducted his insurance business as well as his business as Town Clerk. He served as town clerk and tax collector until he passed in 1966, a total of 25 years!

Sidney F. was educated in Hudson and Nashua, graduating from Nashua High. He married Frances M. Slavin om June 1928. Sidney took on the operation of the family grocery store from his father, William Wallace. As a young man Sidney was active in the affairs of the town serving on Police and Fire Departments. After the passing of her brother-in-law Frances served as town clerk for 6 years and as tax collector for 4 years; after which time these positions were held by John P. Lawrence. Sidney and his family resided on Cutler Street in Hudson. Sidney passed May 1888 and was laid to rest in Hills Farm Cemetery.

Between John J., John E. and Frances the Baker family occupied the office of town clerk for 71 years from 1892 to 1972.  Researched and written by Ruth M. Parker.

This week we begin to revisit some of Hudson’s rural areas of the past. Farms and places of the past!! The first is the Oginskis/Karos Farm on Dracut Road.

Our Remember Hudson… travels this week take us to the south end of Hudson and 99 Dracut Road; for many years home to the Oginskis/Karos Family. The family of Joseph and Barbara (Martin) Oginskis purchased a farm of 57 acres plus house and barn from John Balandis on Old Lowell Road (now Dracut Road) in 1927. Their daughter Vera was about 22 years of age at the time. By 1940, Barbara was widowed; Vera was employed as a mill operator in Nashua. John Karos was residing at the farm and working as a farmhand. Four years later, in 1944, Vera and John were married.

This farmhouse at 99 Dracut Road remained home to Vera and John as well as to Barbara, Vera’s mom, who passed in December 1950. John worked as a machinist in Nashua, his last employment was with Sanders Associates. John passed in August 1966. Vera passed in 2004 at the age of 98. She lived all of her remaining live, except last few months, in this house; having been a Hudson resident for 75 years. I did not know Vera; but in talking with folks who did know her, she was a generous and respected neighbor. One neighbor remembers Vera’s kindness as she passed this home on her way to to catch the school bus a mile from her own home. Another person remembers Vera’s artistic talents and was able to save one of Vera’s paintings before the house was demolished. That painting is now at the Historical Society.

By 2004 all but 14 plus acres including dwelling and barns had been subdivided and sold. As part of her estate the remaining acres were sold to a developer and Hudson Meadows Condominium Association was soon established.

In the 13 years prior to 1927 this 57 acre farm with buildings had changed hands about 5 times. Going back to the early 1800’s this farm was purchased in 1824 by a Paul Hardy from Pelham, NH and it remained in the Hardy family until about 1913 when it was sold by his daughter Susan (Hardy) Cutter. From the age and style of the farmhouse I estimate it was built about 1850 by the Hardy Family.