Conveniently located at 76 Central Street near Lowell Road was Andre’s Restaurant and Antoinnes Catering. A favorite spot for breakfast or lunch! Also a popular meeting place for various service organizations. It was been destroyed by fire and since replaced with a private home.

Andre’s and Antoinne’s on Central Street

Today we have many favorite places in town to enjoy breakfast or lunch: Cookies, Donna’s Place, North Side Grill, and Suzies to name a few. In the 1970’s one such favorite was Andre’s Restaurant located in the Hudson Grange Building at 76 Central Street, and shown in this photo.

Hudson Grange #11 was organized in December 1873 in the Number 6 Schoolhouse on Derry Road with Kimball Webster as the first Master. The grange, a ritualistic family fraternity originally based on rural and farm life, was one of the leading social organizations in town during the 1920’s. Meetings were quite late, beginning ‘after chores’ to permit farmers to attend to the evening milking and feeding before coming out for a meeting. A typical evening would include a crisply run business meeting, recognition of guests, a program, discussions for the good of the order and/or town, and a lunch. A program might be educational, some relevant agricultural topic, local events and/or politics, or entertaining. Often featuring local musical and/or literary talent.

Hudson Grange rented the Odd Fellows Hall (now the American Legion) for it’s meetings from 1903 to 1920. This arrangement proved satisfactory until the winter of 1920 when differences of opinion resulted between the tenants and landlord; as a result the grange looked into a change in meeting location. A large number of members were from the Hudson Center area and advocated using the Town Hall (now Wattannick Hall) in Hudson Center. The body agreed and meetings were moved to Hudson Center; an increase in membership mostly from the center area resulted almost immediately.

For the next 18 months meetings were held in the Town Hall with mixed success; depending upon your proximity to the meeting place. Members from The Bridge area did not want to travel to Hudson Center for meetings and visa versa. Meanwhile representatives from the grange were working to settle differences with the proprietors of the Odd Fellows Hall. Again the matter again came to a vote; and the body voted to return to the bridge area for their meetings.

At about the same time many members from the Center area requested withdrawal cards. This group soon obtained their own charter and Wattannick Grange #327 was organized. A smaller Hudson Grange returned to The Bridge and the Odd Fellows Building until 1935 when the building shown in this weeks photo, the former Hudson Congregational Church Building, became available due to a merger between the Congregational and the Methodist Congregations. Hudson Grange purchased the building from the newly formed Hudson Community Church. Soon after purchase the steeple was removed, the carpet was removed, and the grange held meetings and danced in what had been a church sanctuary.

In 1963 the grange entered into a lease agreement with Andrew Kinsville to establish a restaurant and a catering center; the grange retained ownership and use of the hall as a meeting place. This arrangement continued and Andre’s Restaurant and Antoinne’s Catering grew in popularity with many service organizations holding their regular meetings here. Then, in the early morning hours of May 9, 1977 the building known as Hudson Grange (formerly the ‘White Church’ was destroyed by fire. A small group of young intruders were held responsible for the fire as an act to cover up a robbery. At the time of the fire the premises were used for regular meetings by Hudson Rotary, Hudson Lions, chamber of Commerce, Kiwanis Club, and United Commercial Travel. Each of these organizations quickly had to make arrangements to meet elsewhere.

Hudson Grange also made arrangements to meet elsewhere in town and the building was never replaced. By the mid 1980’s the property was sold. A private residence is now located at 76 Central Street. A few years ago, in 2001 members of Hudson Grange and Wattannick Grange merged back into the charter of Hudson Grange. Meetings are now held in Wattannick Hall in Hudson Center.

In 2004 a large portion of Lowell Road, including that section near the Presentation of Mary (PMA), was widened to accommodate the increase in traffic. Prior to this project the historic gates embraced the driveway which lead from Lowell Road to the oval in front of the PMA building. Once the right of way for the reconstructed Lowell Road was laid out these gates were found to be in the way and had to be moved. When the project first started it was estimated the gates could be moved for about $50,000. The early image of the PMA gates is from a post card compliments of Gerald Winslow.

When plans were finalized the historic gates would be moved approximately 75 feet back from Lowell Road. Once moved the gates would grace the front of the property but they would no longer embace the driveway to the Presentation. A new and safer driveway entrance to was planned opposite the Executive Drive intersection with Lowell Road. This change in the driveway would also permit safer access of fire equipment to PMA as the modern vehicles were too large to pass under the gate. According to a July 2004 article in the Hudson Litchfield News, once the bid specs for moving the gates were prepared nine bid packages were sent out, but only two actual bids were returned. Both of these had prices far in excess of the planned $50,000. 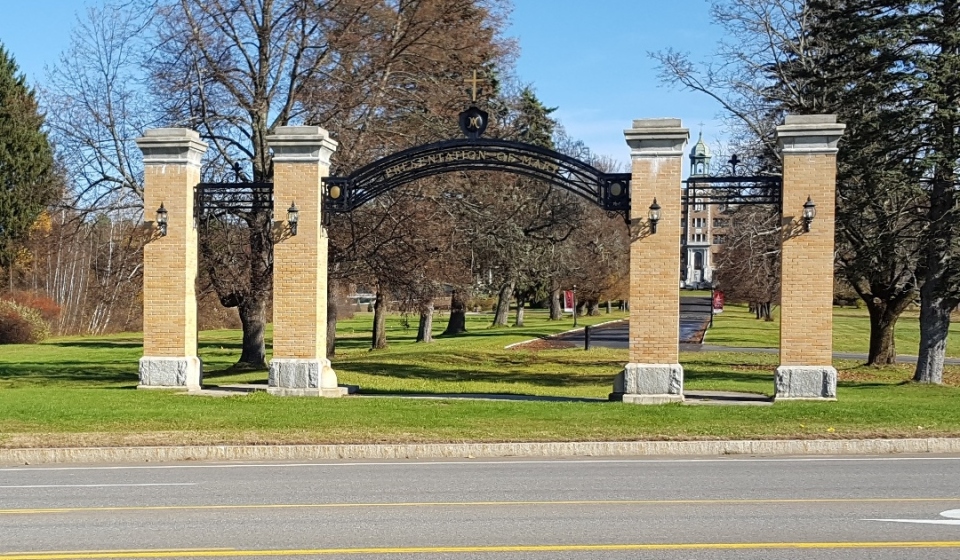 The gates were not on the National Historic Register but they could be eligible to be on the register and the project to move the gates could not endanger this eligibility. The exterior bricks on the gates had been replaced in 1980. The granite blocks used in the foundation and the wrought iron work on the top of the gate were deemed as the important pieces. In actuality parts of the gate, such as the wrought iron fixtures and the sections on the top and bottom were salvaged and new gates were built back from the widened roadway by about 75 feet. This work was completed in September and October of 2004. The modified driveway was completed in 2003. The recent photo of the gates was taken by the author this past week. I wish to acknowledge an article “Presentation of Mary Gates to be Moved” authored by Lynne Ober which appeared in a July 2004 edition of the HLN.

Popular at the time was The Steak Barn on Lowell Road was located on a part of the Benton Morgan farm. By 1976 a part of his farm where Ben raised cattle, hens, and vegetables was transformed into a modern restaurant and racquet club. The large plastic bubbles housed the racquet (tennis) club. His old chicken house was modernized and converted into the Steak Ban.

The revitalization of the business center at the bridge which occurred during the decade of the 1960’s impacted Central Street as well as Ferry and Webster Streets. Demolition of buildings occurred by both private and public enterprises; this week we look at the significant changes along Central Street near Post Office Square.

Our early 1900’s photo of P.O. Square at Central Street shows two landmark buildings which were still present in 1960; the old Baker Block (originally Carnes Block) on the right and the Martin House opposite and on the left at the corner with Ferry Street.

James Carnes came to Hudson about 1840 from his native Vermont. In 1844 he bought the old south meeting house near Blodgett Cemetery for $100. He took it down and proceeded to build a house from the resulting lumber and material in 1845. This house he built on a small triangular lot of land which was conveyed to him by the proprietors of Taylors Falls Bridge. The date 1798 was plainly seen carved upon the stone underpinning of the front of the house indicating the date of the building of the meeting house. This is the same house later owned by Elisha A. and Susan (Steele) Martin. After the death of Elisha his widow Susan and daughter Etta continued to reside here. It was later the home of Etta’s sister Anna Woodbury. Etta sold notions, newspapers, ice cream, etc. Nearby children were delighted by her glass candy case and penny ice cream cones.

At the time of his arrival to Hudson James Carnes wasl a wheelwright and blacksmith by trade. He gave up smithing and turned to the more lucrative business of manufacturing “Paddy” wheelbarrows for the growing railroad business during the pre-civil war days; a business he operated successfully for several years. He then converted to the general wheelwright business which he was operating when he constructed his combined store and assembly hall. He ran his business and rented his hall to various town organizations until his death in 1883. From 1874 to 1876 the newly organize Hudson Grange No 11 held meetings here. In 1879 after the Methodist Church was destroyed by fire the congregation held services in “Carnes Hall” until the new brick church was built in 1890.

After Carnes death in 1883 the store was occupied for short intervals by Francis Marden, Waldo Waldon, and Willard Webster. in 1890 Nathan Webster, a brother to Willard, enlarged and remodeled the building and the Baker brothers, John J.and William, took over the building and operated the store for many years until three sons of William, John E, Sidney, and Wallace took over the store and continued the business until just before World War II. From the Bakers Store one could purchase meats, groceries, feed, hay, and hard goods. Upon occasion, depending who was appointed postmaster, this served as the town post office. When the building was enlarged a third floor auditorium was added. A number of interesting events occurred in this auditorium including silent movies, magicians and strong men of traveling medicine shows. This third floor even served as the town library before the Hills Memorial library was built in 1909.

The revitalization of the area began with the destruction of the Baker Block in 1964. Originally known as the Carnes Block built in the early 1860’s. Some of the principal owners of this building were James Carnes, Nathan Webster, the Baker Brothers for two generations, and finally at the time of demolition the Rodgers Family. By 1964 when this building was demolished it was considered by many as a firetrap and an eyesore as one entered the town.

Old Martin House prior to Demolition

By 1969 the State of NH identified those properties needed for access roads. This included the Martin House, then owned by the Rodgers Family, and land frontage up to and including the Community Church. Our second photo shows the Martin Home in the late 1960’s shortly before it was demolished. Both photos are from the collection of the Hudson Historical Society.

One additional landmark building which disappeared in this time frame was the old transfer station for the three electric railway lines which met at Post Office Square. It was later the site of Joe Temple’s drug stone and, according to the memory of some residents, used as a residential dwelling before leaving our landscape alongside the concrete Taylor Falls Bridge. It is not clear to me when and how this building disappeared.